Another all breed BIS and more...! 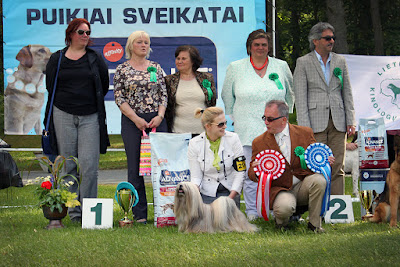 
We spent the last weekend of May, 30th & 31st at the double national all breed shows in Birštonas, Lithuania. Lhasa apsos were judged by Mrs. Tatjana Romanenkova of Belarus and Mr. Igoris Zizevskis of Lithuania. Both days our breed results were the same. The youngest of the team, "Flokki" Tai Fanza Vero Possumus went Best baby in Breed, "Chippa" Daylight v.d. Pacific Paradise went Best puppy in Breed and her sire, "Silverado" Multi BIS BISS Ch. Chic Choix Sixth Sense went Best of Breed! As i had my hands quite full, i was helped to show the dogs by Gabrielė Bražėnaitė and Julija Dijakovskaja on Saturday and Diana Vasiliauskaitė on Sunday. My heartfelt thank you goes to the girls! 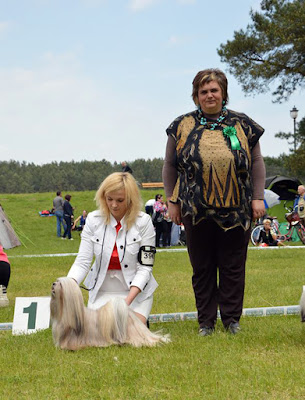 CHIC CHOIX SIXTH SENSE winning the Breed
Photo by Julia Dijakovskaja
Furthermore, Silverado went Best in Group-2 under Mrs. Tatjana Romanovskaja on Saturday and Best in Group-1 under Mr. Igoris Zizevskis on Sunday. Amazing but true, he ended up winning also the BEST IN SHOW under Mr. Andrzej Szutkiewicz of Poland.
Chippa went Best puppy in Show-3 both days, under Mrs. Audronė Babianskienė and Mr. Igoris Zizevskis shown by Augustė Močiulskytė on Saturday and myself on Sunday. 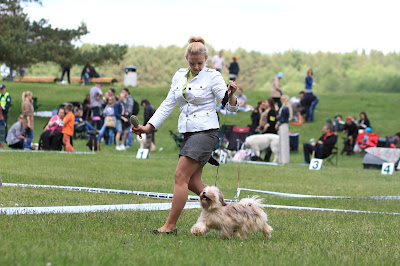 
Meanwhile abroad, another daugther of Silverado, namely "Silvera" Tai Fanza Chic Choix Incense was presented at the La Roche sur yon national all breed show, France and she won another CAC and Best of Breed judged by Mr. Patrick Dewaele of France.
Last but not the least, little "Ronja" Tai Fanza The Spitfire at Panaphia did well at the toy breeds specialty in Råde, Norway. She was Best junior in Breed and Best junior in Show-2, Best of Opposite Sex and also 2nd best among all BOS winning dogs. The breed judge was Mr. Dommic Harris of Ireland, the Junior BIS was judged by Mr. Brian Carrol of Ireland and the final competition for BOS winning dogs was Mrs. Ann-Marie Haugsten of Norway. Way to go! 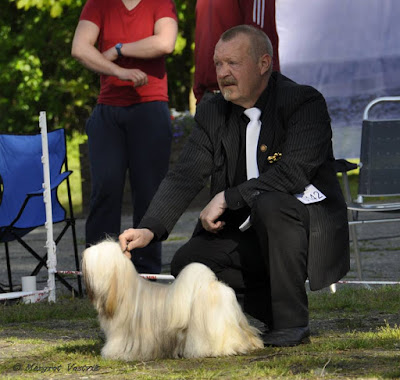 TAI FANZA THE SPITFIRE AT PANAPHIA 15 months old
Photo by Margret Vestvik
Posted by Unknown at 8:31 PM No comments: 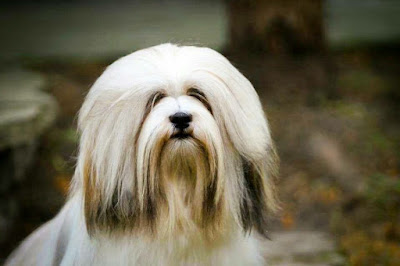 
As the last couple of weeks were hectic here at Tai Fanza, i could not update the blog with the show news of our Polish boys who did great, but better later than never they say!
"Theo" Tai Fanza The Patriarch won his class with CAC at Swiebodzice national all breeds show held on May 16th. 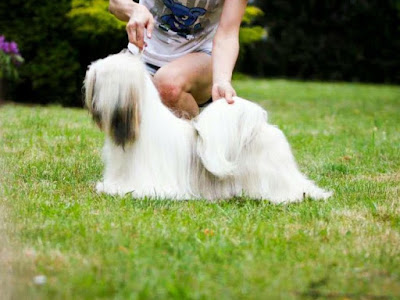 TAI FANZA THE PATRIARCH 15 months old
Photo by Anna Majerowicz
The weekend after, there was International all breed show held in Rzeszow. "Fabio" Tai Fanza Chic Choix Illuminati won CAC and RCACIB under Mr. Lemmer Torsten of Bulgaria and he is now to be confirmed new Polish Champion! 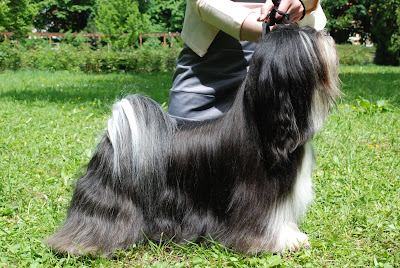 This was definitely the weekend of Silverado and his kids!
Happy to say i was again out at the dog show after nearly a year break and what a day it turned out to be! Silverado - Multi BIS BISS Ch. Chic Choix Sixth Sense went all the way to BEST IN SHOW! He was judged by Mr. Viacheslav Verbitskiy for the Best of Breed and BIS and Mr. Alexandr Shishkin for the Best in Group. The show took place in Jonava, Lithuania. 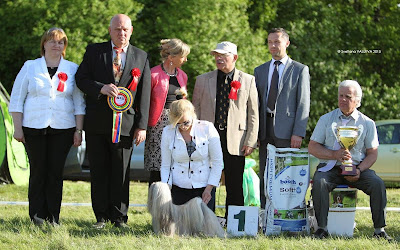 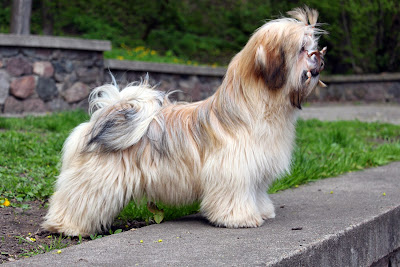 DAYLIGHT V.D. PACIFIC PARADISE 6 months old
Photo by Lauryna Kudirkienė
Meanwhile in Norway, at the International all breed show in Ålesund, another daughter of Silverado from my own I-litter, namely "Maeby" Tai Fanza Chic Choix Isadora went 3rd Best bitch with CC and RCACIB under Mrs. Brigita Kremser of Slovenia. 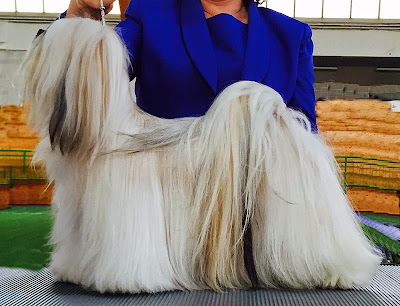 TAI FANZA CHIC CHOIX ISADORA 22 months old
Photo by Eli Pedersen Sterri
Last but not the least, Maeby's litter brother "Fabio" Tai Fanza Chic Choix Illuminati was shown at the International show in Lucenec, Slovakia and won his first CAC towards the Slovakian Championship as well as RCACIB which will turn to CACIB, under Mr. Miroslav Gunis of Slovakia. 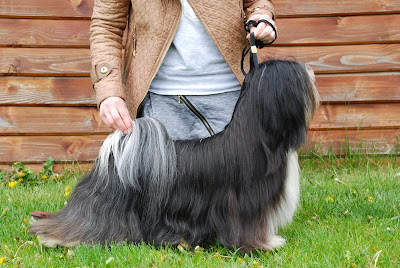 I am again late with my blog updates due to the busy times here at Tai Fanza. The babies from our latest litters are now in their new homes. I just got this wonderful photo by my friend Anna Majerowicz, this is "Mowgli" Multi Ch. Tai Fanza Chic Choix Mowgli and his little friend "Soya" Tai Fanza Viva La Vita posing together. Aren't they cute. 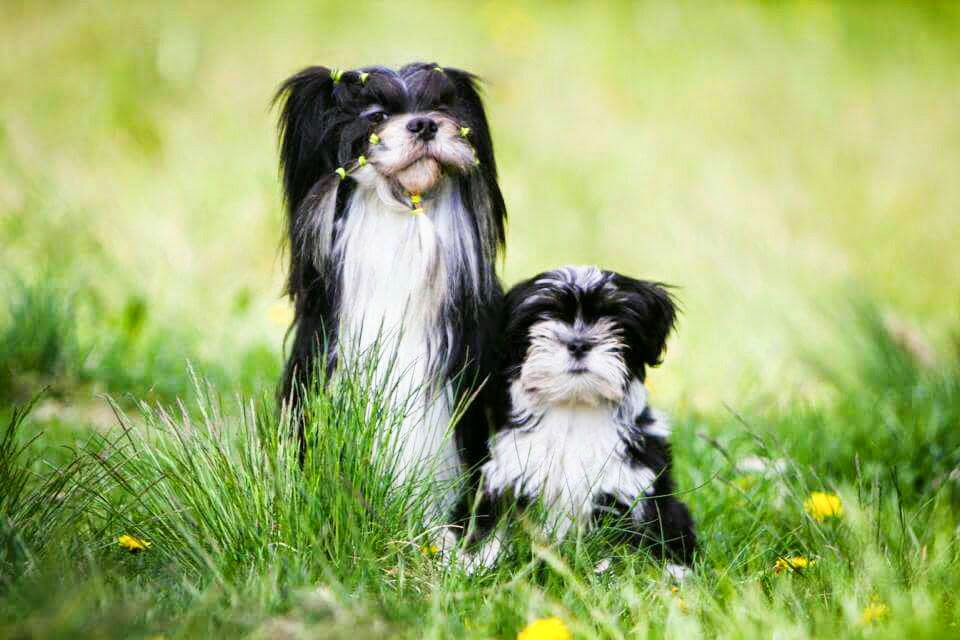 The last weekend of April, 25th & 26th, Anna went to triple shows in Satu Mare, Romania where she did well with her youngster "Theo" Tai Fanza The Patriarch. Theo went Best junior in Breed three times to become Romanian Junior Champion as well as Best of Opposite Sex twice under judges Mr. Christian Stefanescu of Romania, Mr. Stelios Makaritis of Greece and Mr. Slobodan Nasteski of Macedonia. 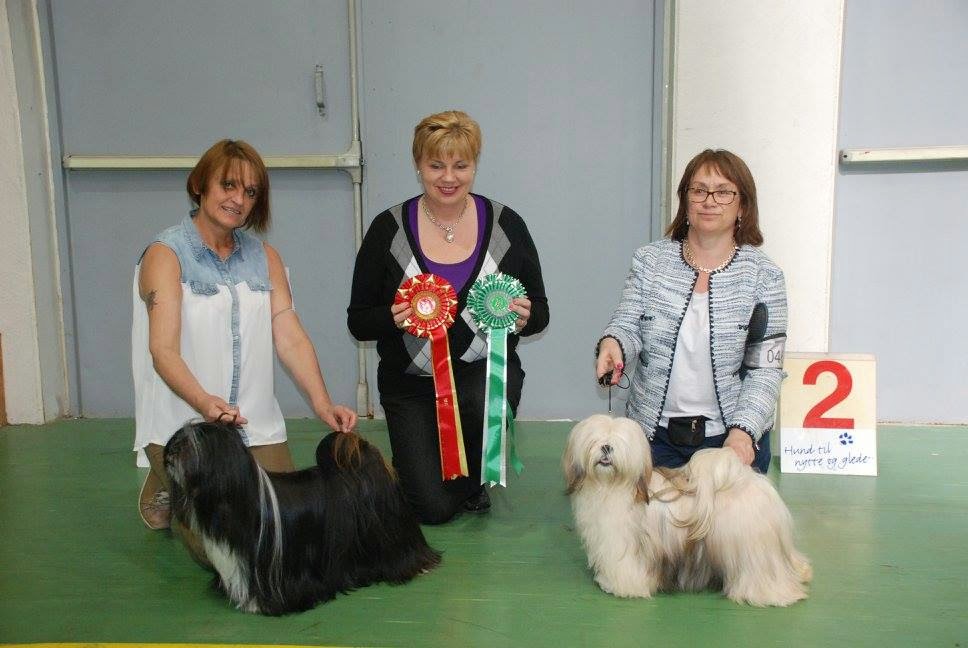 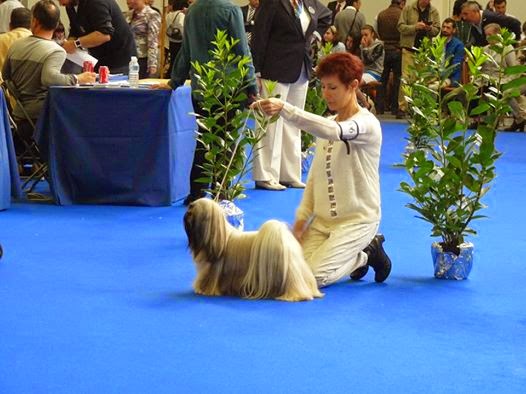 TAI FANZA CHIC CHOIX INCENSE going BOS in
Photo by Anne-Marie Minotte
Last but not least, at the International show in Irun, Spain, "Silvera" Tai Fanza Chic Choix Incense wins CAC, CACIB and Best of Opposite Sex under Mr. Jean-Francois Vanaken of Belgium. She now holds the total of 7 CACIBs from 3 different countries at only 21 month of age! Way to go.

Posted by Unknown at 2:49 PM No comments:

Better later than never! We have been quite busy lately but would still like to share the awsome show news from the weekend of March 28th & 29th .
"Ronja" Tai Fanza The Spitfire at Panaphia did an amazing job at the Norwegian toy club show in Stavanger. On Saturday, she went Best junior in Breed with CAC and ended up BEST JUNIOR IN SHOW, all that under breeder Judge Mr. Rafal First of Poland. The following day, not only she won another CAC, Best junior in Breed but also Best of Breed, under Mr. Nebojsa Savicic and once again BEST JUNIOR IN SHOW under Mrs. Moa Persson of Sweden! 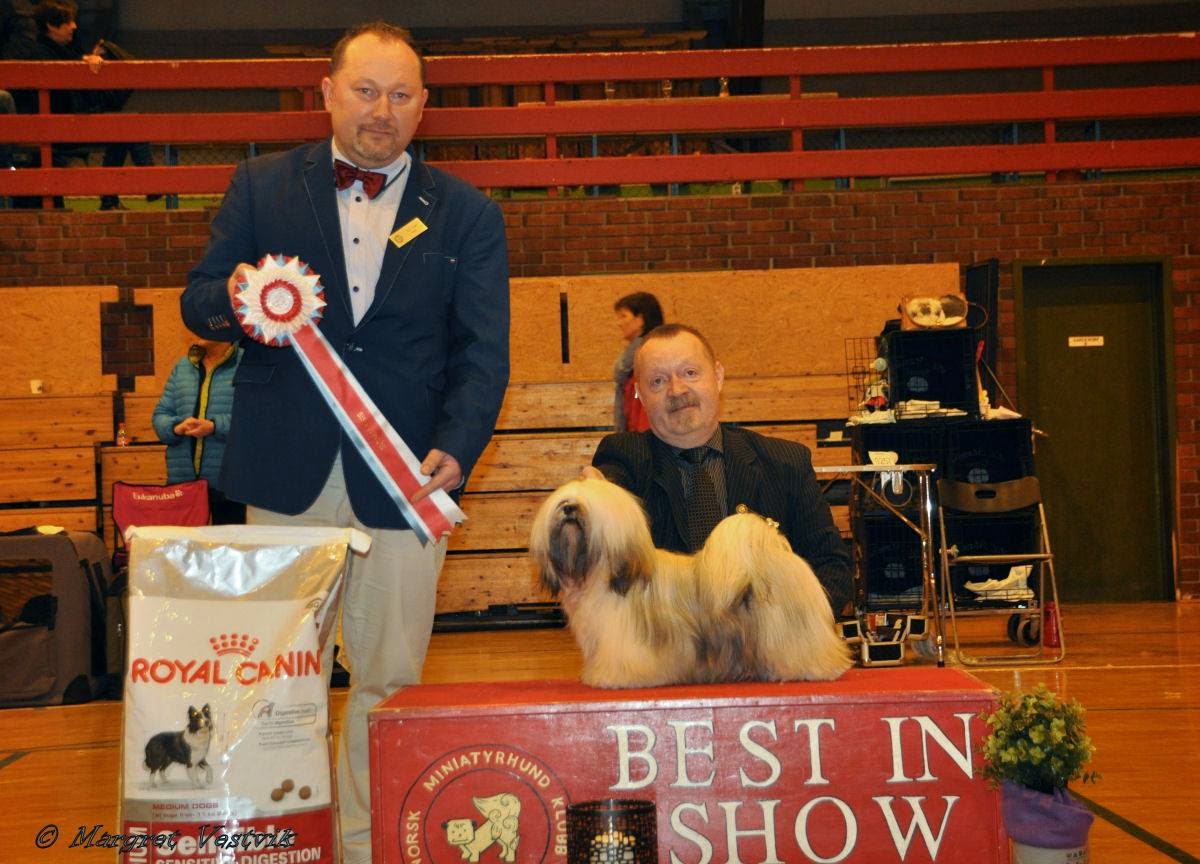 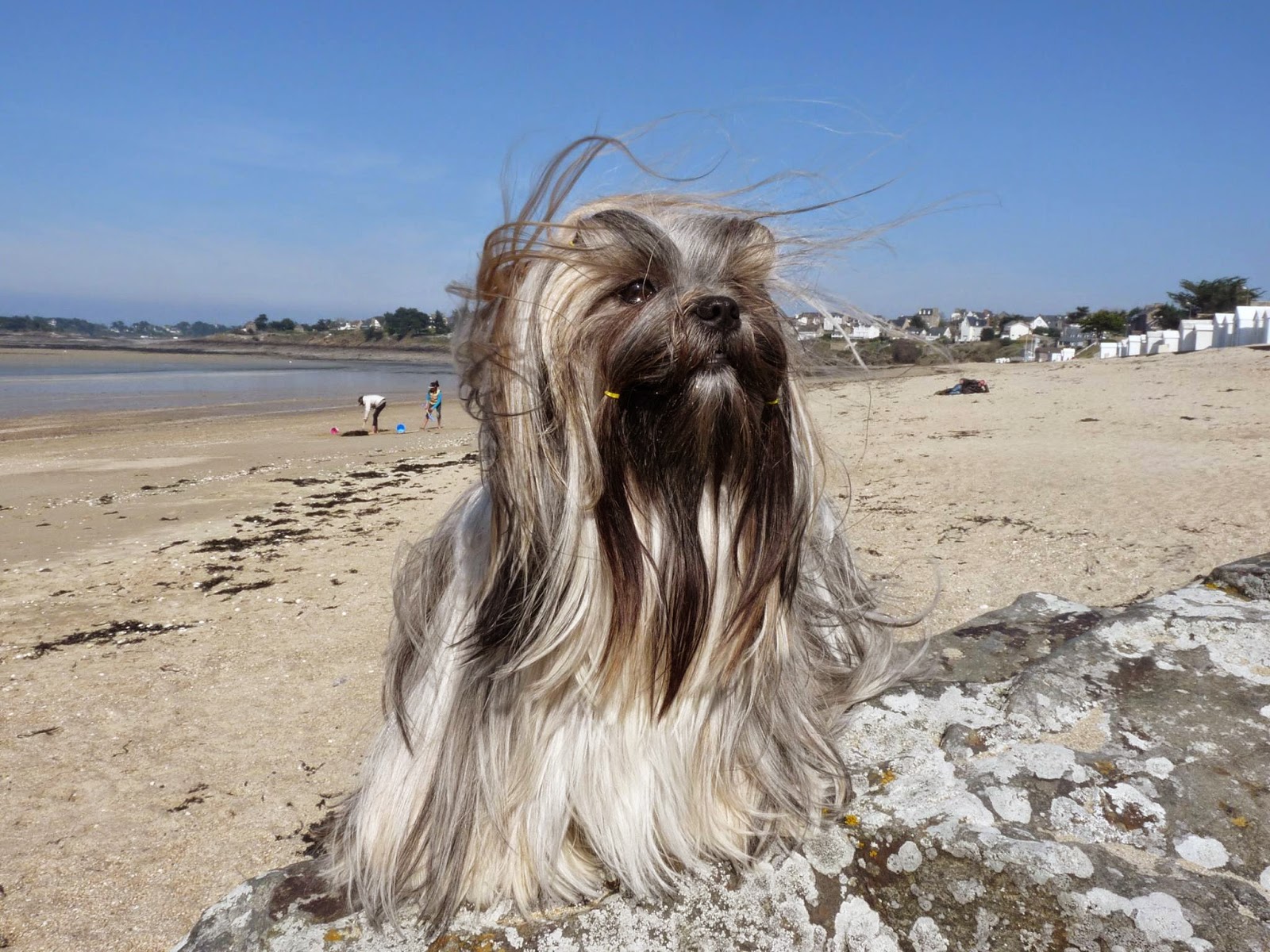 TAI FANZA CHIC CHOIX INCENSE enjoying her life in western France
Photo by Michelle Janin
Meanwhile at the International dog show in Luxembourg, our "Silverado" Multi BIS BISS Ch. Chic Choix Sixth Sense went 2nd in the Champion class to win RCAC which will turn to the Luxembourg Champion title. The breed was judged by Mrs. Elisabeth Feuz of Switzerland. It was his last show with Jessica. Silverado is now back with us safe and sound!
Thank You Jessica for the great job with our boy.
Posted by Unknown at 12:44 AM No comments:

Show news from Poland and Slovakia

Last weekend "Theo" Tai Fanza The Patriarch was shown at the International dog show in Drzonkow, Poland. He won the junior class with JCAC and BOS junior under judge Mr. Pero Bozinovski of Macedonia.
Theo is now Polish Junior Champion! 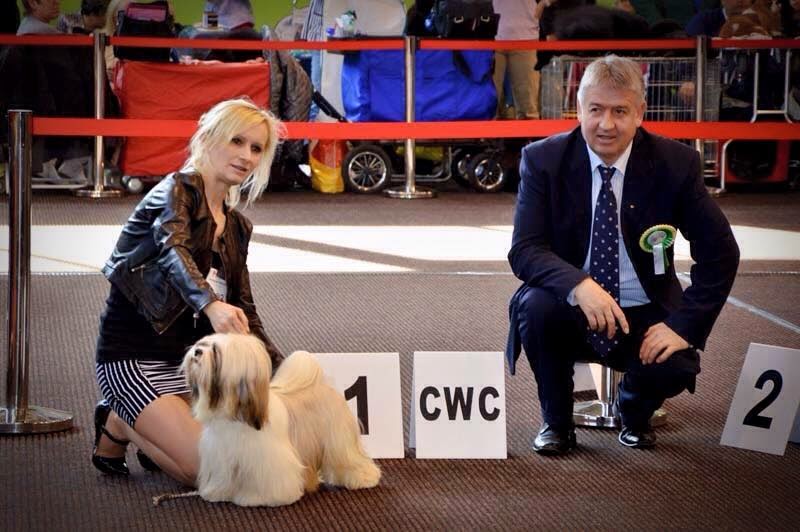 Show news from Hungary and France

Last weekend "Maeby" Tai Fanza Chic Choix Isadora won her very first CACIB at the International show in Budapest, Hungary under Mr. Kardos Vilmos, she was also BOS. The day before she won RCAC and RCACIB.
Meanwhile, her litter sister "Silvera" Tai Fanza Chic Choix Incense was shown at the International all breed show in Niort and won yet another CAC, CACIB and BOB under Mr. Klein Jean Claude of France. Well done both girls! 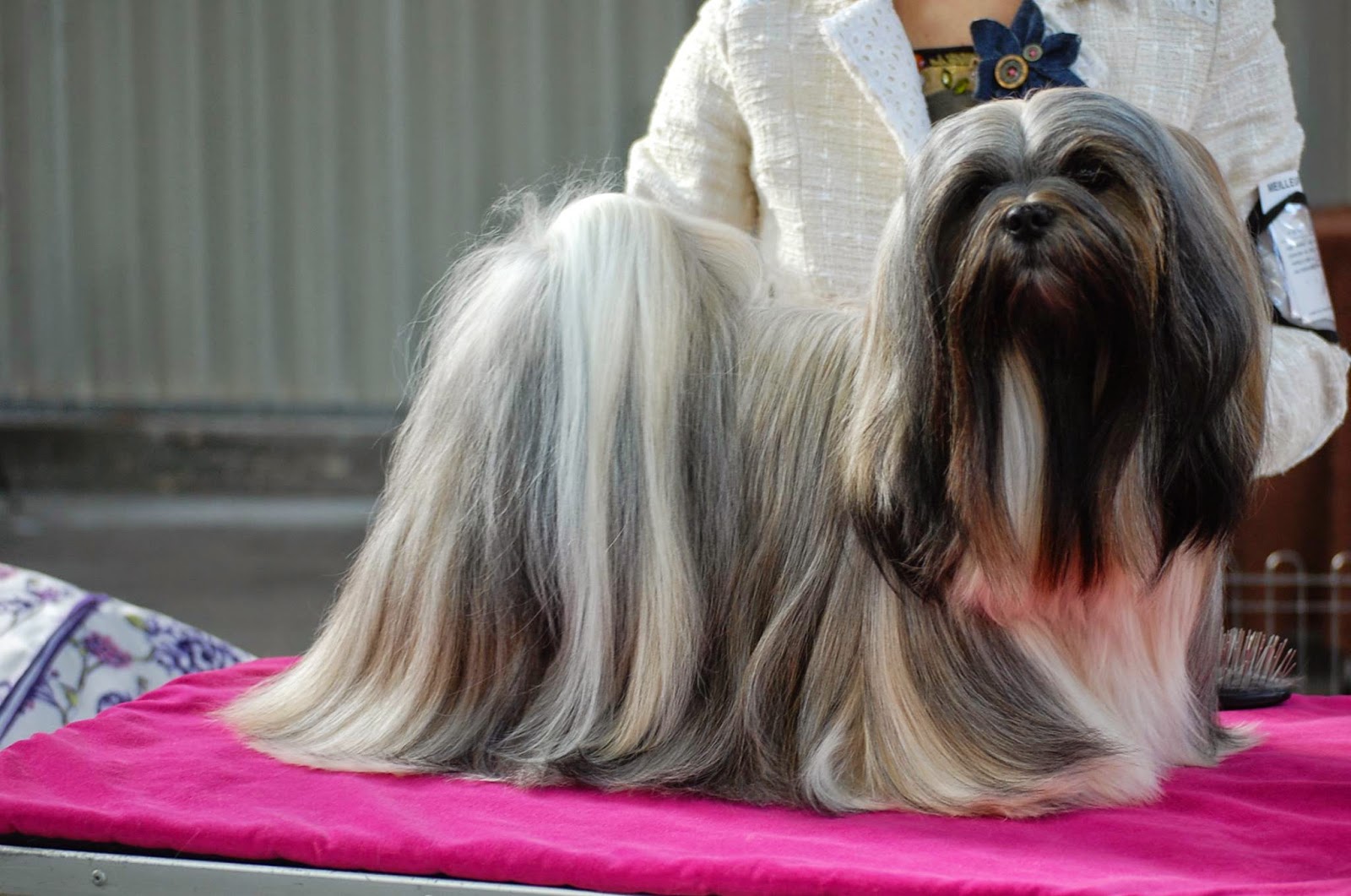 Little bit late, but still before the new show weekend has begun! Good news from the Czech Republik, Norway and the Netherlands this time...
First thing is first, we do have a new Champion in our Litter I! "Stella" Tai Fanza Chic Choix Idea Fix went to the double International shows in Brno and won her final CAC as well as RCACIB to become a brand new Czech Champion, under breed specialist Mr. Rafal First of Poland. Stella is co-owned with Mrs. Eliska Vaskova of Dar Tibetu kennel.
This makes the 4th homebred Champion for Tai Fanza! 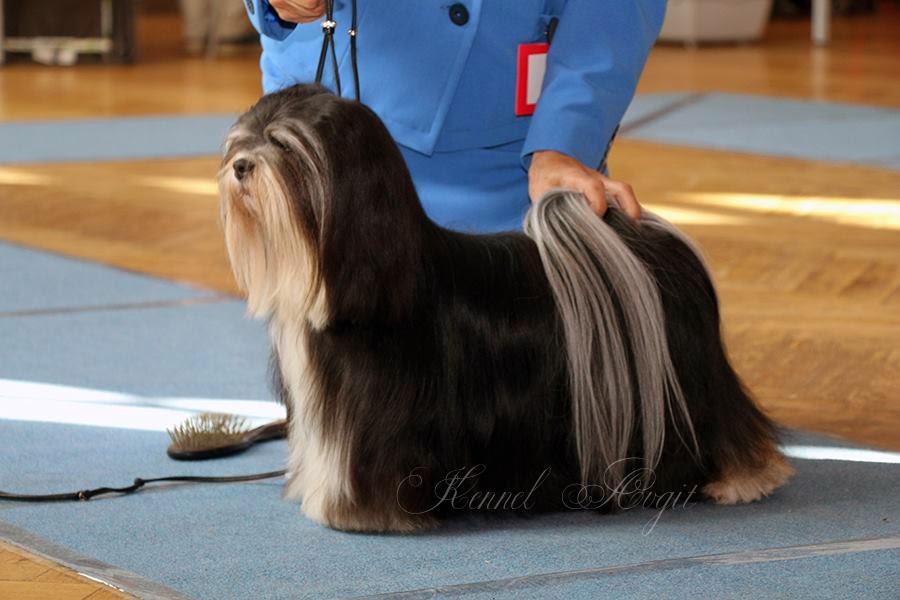 TAI FANZA CHIC CHOIX IDEA FIX (pictured at the earlier shows)
Photo by Olga Ivanova
Meanwhile her sire "Silverado" Chic Choix Sixth Sense who is currently staying with Mrs. Jessica Geraerts of v.d. Pacific Paradise kennel in the Netherlands, went to the International show held in Eindhoven and was once again reserve best male with RCACIB in the quality competition, this time judged by Mrs. Ann Ingram of UK.
One of the youngsters from the Litter T, namely "Bella" Tai Fanza True Romance was shown at the all breed show in Skedsmo, Norway and went reserve best bitch with RCAC under Mrs. Annemarie Sæland of Sweden. Not bad for a girl of just a year old. Another girl of our breeding, "Maeby" Tai Fanza Chic Choix Isadora was evaluated excellent at this show. Way to go!
Posted by Unknown at 6:07 PM No comments:

Show news from Greece and Finland

January 31st & February 1st was yet another great show weekend!
There were two International shows held in Thessaloniki, Greece. "Theo" Tai Fanza The Patriarch went Best junior in Breed twice and became Greek Junior Champion! The breed was judged by Mrs. Inese Pablaka of Latvia on Saturday and Mr. Stelios Makaritis of Greece on SundayTheo is owned by Mrs. Anna Majerowicz of Poland and was shown by  Mr. Nikos Papadopoulos on this occassion. 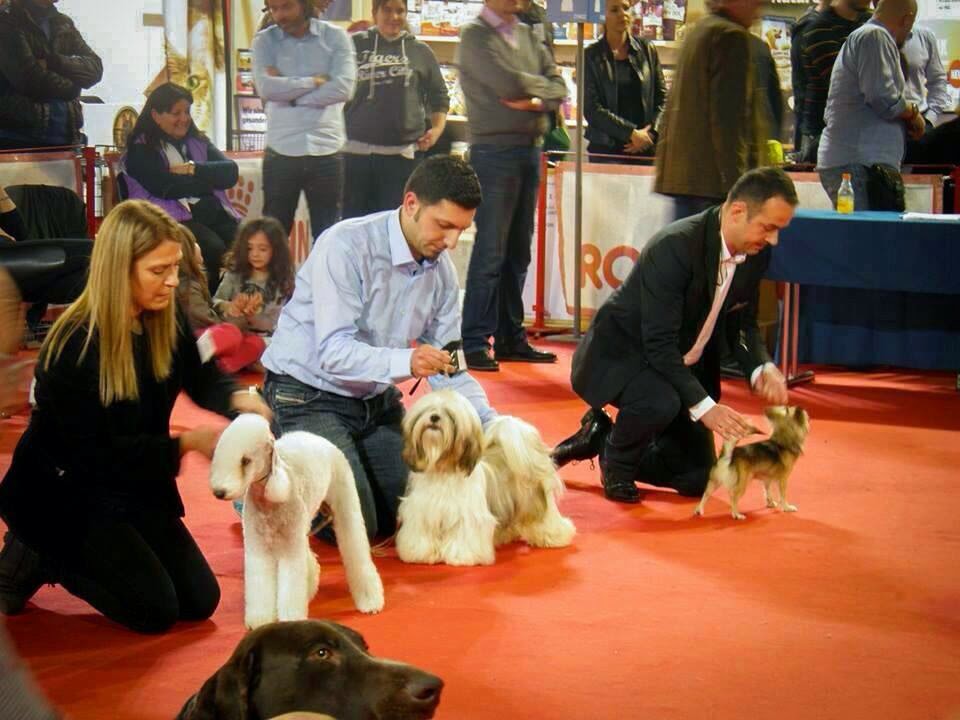 
Meanwhile in Finland, his littersister "Bella" Tai Fanza True Romance was shown at national show in Parkano and she went Best of Breed with CC! The judge was Mrs. Maija Mäkinen of Finland. At the same show another female of our breeding, "Maeby" Tai Fanza Chic Choix Isadora was 3rd Best Bitch. Both belong to Mrs. Anne-Cathride Unelsrod of Norway. Way to go! 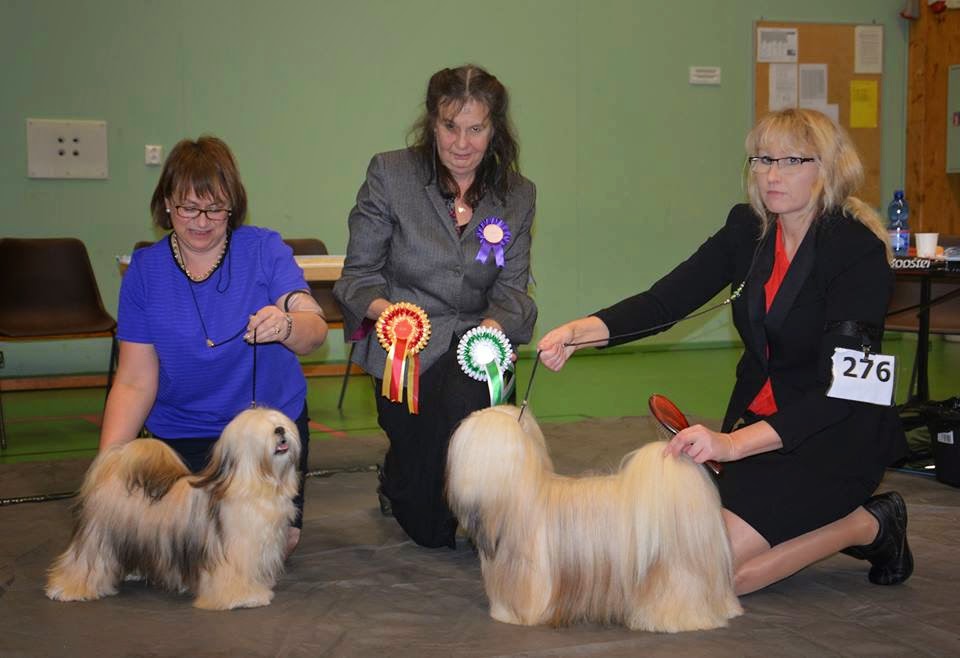 TAI FANZA TRUE ROMANCE winning the breed at just 11 months of age
Photo by Anki Johnsson
Posted by Unknown at 9:29 PM No comments:

Fantastic start of the year for "Silvera" Tai Fanza Chic Choix Incense at Bordeaux International dog show in France, January 18th. She won CAC, CACIB and BOB under Mr. Barenne of France and ended up BEST IN GROUP under Mr. Cabon. 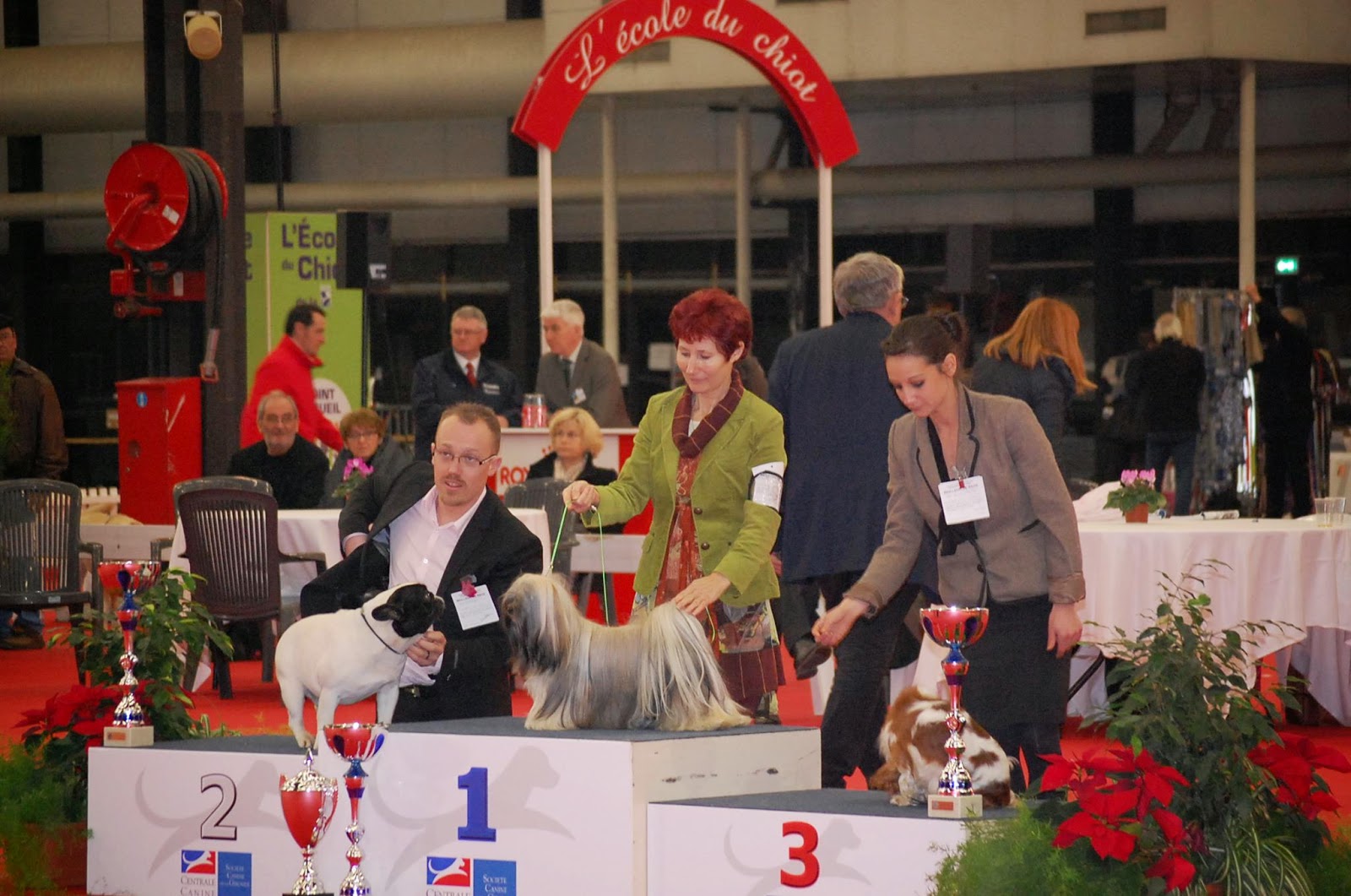 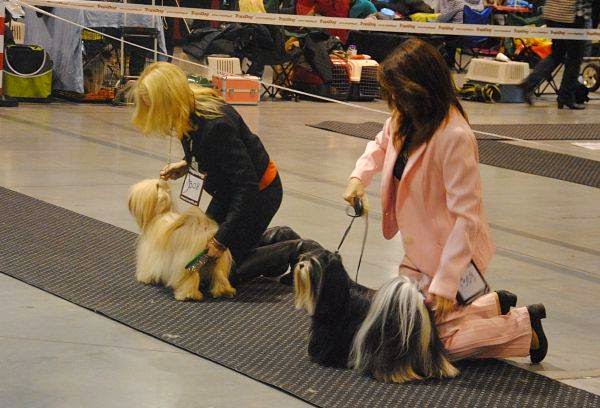 
Another young female "Bella" Tai Fanza True Romance has made her debut by going Best junior in Breed and 2nd best bitch with CAC at the show in Norway, January 17th, under...
Posted by Unknown at 7:02 PM No comments: